Out of the long list of nature’s gifts to man, none is perhaps so utterly essential to human life as soil.
(Hugh Hammond Bennett)

The United Nations officially adopted December 5th as World Soil Day in 2014 in order to bring awareness to the importance of healthy soil through sustainable practices that encourage biodiversity. 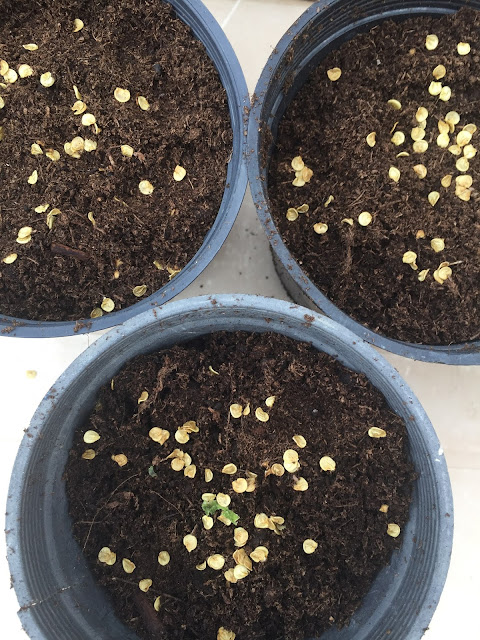 Unfortunately, much of the food grown in the United States is treated with harmful pesticides in order to increase farm productivity.  Fertilizers are then used to bring life back to the soil that's been killed off by the pesticides.  Monocropping (such as corn, soybeans and wheat) further depletes the land of any nutrients and without nutrients in the soil, farmers are basically left with land degradation.  It's a vicious cycle that needs to be remedied. 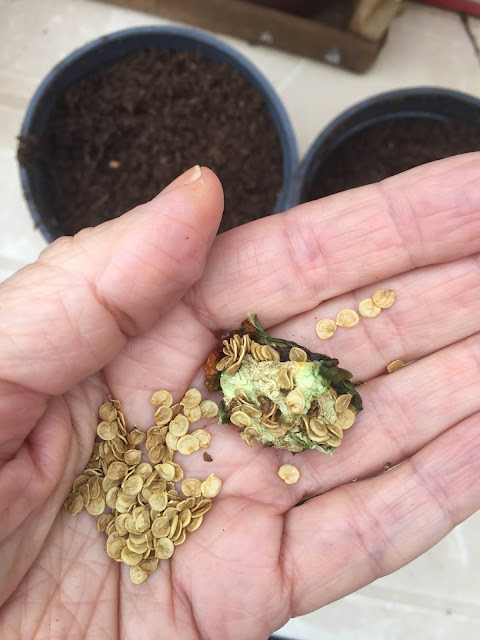 Saved some seeds from a bell pepper and planted them today.  Whether they grow or not doesn't matter since it costs nothing to try.
I've got lemon and tangerine plants that I successfully sprouted from storebought fruit. 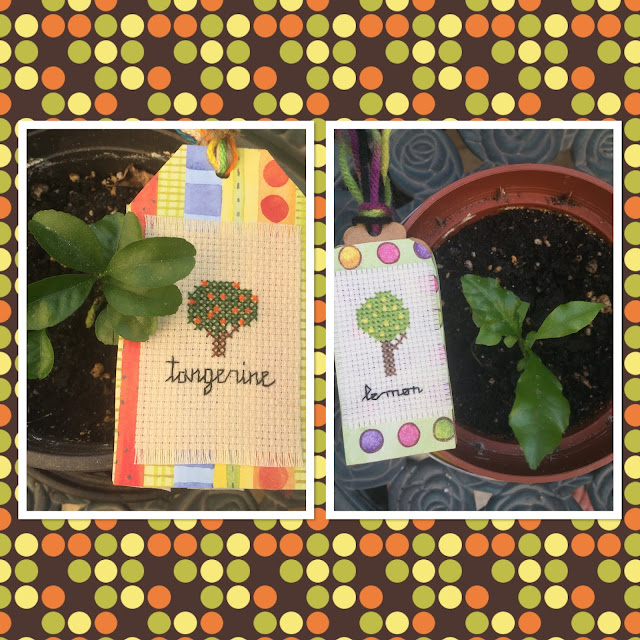 I put them outside once they were established and they are a bit waterlogged right now from all the rain, but hopefully we'll get a drying out period coming up this next week. 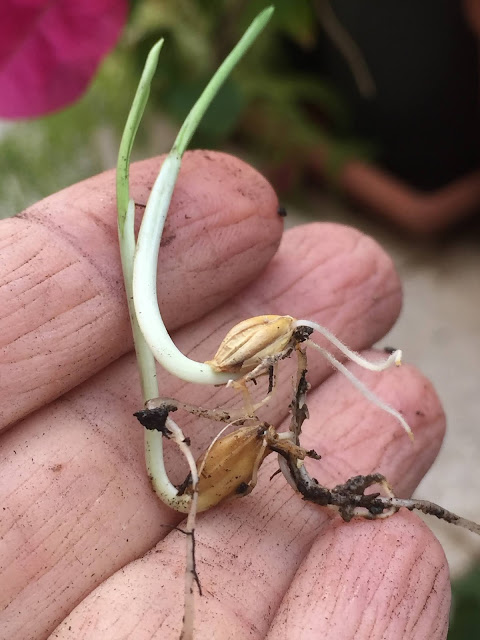 My husband bought a birdseed mix that I put out in a bowl on our balcony.  Not sure what's all in it, but today I found seeds that had been dropped and actually started sprouting in some wet leaf litter.  I put them in a small pot and we'll see what happens. 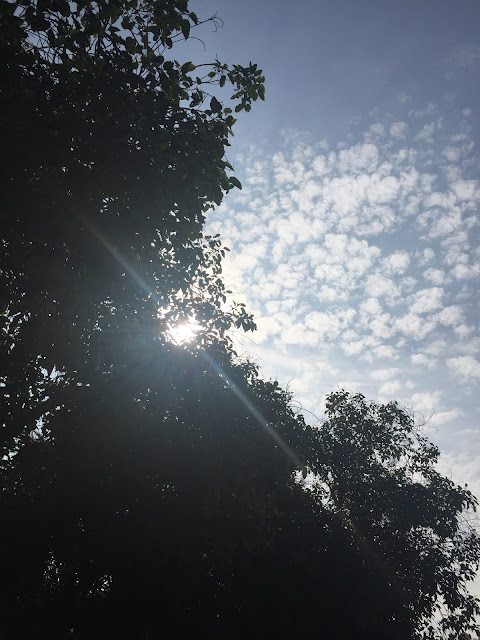 We had sunshine this morning but it's rained again this evening and more is expected throughout the night. 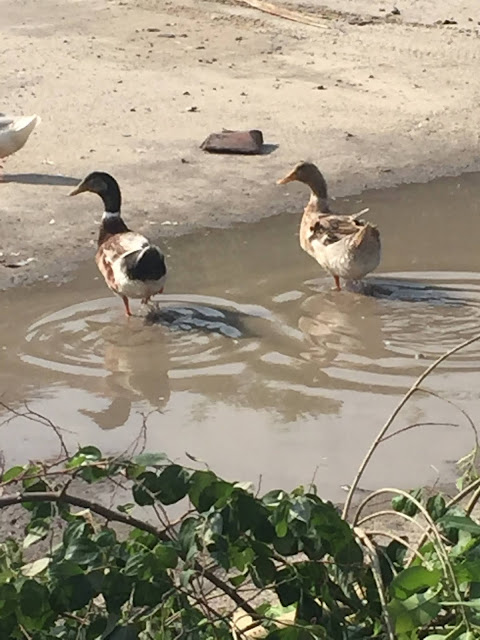 Neighborhood ducks are enjoying the puddles, but I'm ready for a dry spell.
How's the weather where you are?

Dearest Tammy,
Soil has been the bread basket for humanity since Earth's beginnings.
Being the son and daughter of a Market Gardener, Pieter and I fully understand about that aspect.
There always has been a logical change of crops, for the sake of the soil's condition and for avoiding the spread of certain diseases.
Don't think that the UN is the most scientific leader in all this... Way too political!
Anxious to see what springs up from your sprouts, grown from seeds.
Hugs,
Mariette

We had major rains last night. The beating on the window was so loud it woke me up. Then the rest of the day today it has been windy, cloudy and quite cold.

Good luck with your citrus. I've not had luck getting volunteer seeds to grow a plant that produces fruit. Apparently purchased citrus is from grafted trees and the seeds are sterile. Well, that is how it is in the United States. Not sure about elsewhere.

I had no idea today was soil day. I’m already thinking ahead to what I will try and grow. I may try to sprout some peppers. We eat lots of those.

I love your growing things from fruit and veg you can also eat! We have 4 raised beds now and I think I will do some growing of seeds from our edibles, too! If we can just make it through this winter!! ((hugs)), Teresa :-)

It's interesting to see the things you've planted and sprouted on your balcony Tammy. Having grown up in Iowa and then Nebraska, crops are so important to the farmers. In my opinion, for what it's worth, is the big companies are chasing the small family farms away and then basically using the land until it's worthless and moving on. They don't care. My uncle and Grandpa were farmers who knew about rotating crops. They had to make the land last because it was their bread and butter and they fed their families with it. It's sad to see what's happening now. The almighty dollar is the only thing most of the big companies care about.
Oops! Sorry if that sounded harsh. We just have to think about the generations to come. We need to leave a decent legacy.
Blessings,
Betsy

I think it's a great idea to start your own plants from seed, I did that many moons ago but I had a terrible time with the lighting in my house.

While I buy organic fruits and vegetable, sometimes I find the markup in price insanely high. We have have farmland surrounding us in Michigan, and the crops are rotated every spring to precent disease. I've done that in my own garden. Many farmer release aphids and ladybugs to destroy crop damaging bugs. We've made great strides in the US in going this route. I agree with Betsy that we need to support the farmer's that truly care about producing chemical free fertilizers. For myself, I buy local. I often get frustrated that my daughter uses almond and coconut milk rather than cow's milk, for whatever reason. So many cows have been euthanized because of this and the cattle farms are disappearing. To have milk from an almond? I don't get it.

I'm sorry to be overboard negative, but I've had bird feeders that of course, dropped seeds into the soil. When you buy seed, its best to freeze it for at least 24 hours to kill any harmful eggs that can introduce many unwanted weeds in your garden. Dropped seeds, for me, attracted mice and chipmunks which can do real damage to your home.

I love the idea of Soil Day and always appreciate your way of getting involved in all the best for our plant.

It's always fun to see what the seeds will do.
Weather here - of course is now moving into the winter months. It's generally in the 20s or 30s in the mornings and warming up to 40s by day which isn't bad for December in Central Illinois. In fact, we are supposed to be in the 50s by mid to later this week, which is exceptionally warm for this time of year. The ground still hasn't froze and can be dug in right now, but that's pretty much how it's been for many winters now in the natural change of climate with all the ebbs and flows. I've been pushing myself to get outside in the early mornings for my runs/walks as much as possible, because I realize there will be many times coming in January and February when it will be solely indoors on the treadmill, so have to take advantage of the fresh air while I can.

Tammy - it continues to be cold here, but not much snow. We need it for our local ski resort, where we work part time. I totally agree with your comments about agricultural practices. I don't think people realize how long it takes for soil to be produced!!!