Jingles is pretending she lives in a jungle rather than a desert environment. I'm guessing it is cooler in the pot than on the cement ground. 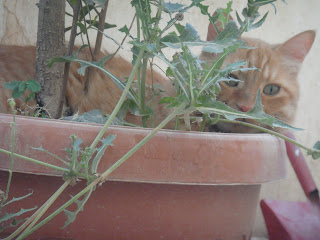 We had a hazy day so the temperature wasn't quite as bad as it has been. I know for some, 99 degrees would still be considered hot, but anything below a 100 feels pretty good to us. The sun was hidden most of the day by haze but as it began to set this evening, a pretty pink glow could be seen on the clouds that had been drifting by all day. 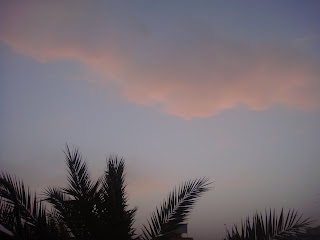 Yesterday's cleaning spree resulted in rearranging the living room so I could clean around and behind everything. That meant hours of extra work that I had not intended. 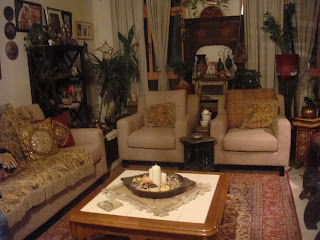 So today I decided to take it easy after school. Of course, taking it easy doesn't mean doing nothing. There is always the daily stuff like cooking, washing dishes, washing and folding clothes, preparing uniforms, general tidying, watering plants on both balconies, brushing Jingles ... all that stuff that just eats away at your time. But I did make time for a batch of oatmeal cookies. 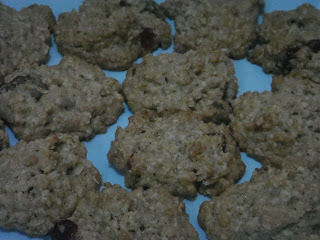 And now just a bit of crocheting before bedtime. Tomorrow is another day! Hope your Sunday is a good one. Best wishes and blessings, Tammy
Posted by Tammy@T's Daily Treasures at 9:12 PM

I had a cleaning spree on Friday, clearing out cupboards, cleaning the windows, today its back in the same state as before,....kids....!!
Biscuits look yummy. xx

Jungles is adorable..... Today we are in the upper 50's with more rain. We have had a VERY rainy spring in northeastern Pennsylvania. We are getting a new roof this summer & it looks now like it will not be until mid-summer because of all the rain. Sure don't want the job half done & end up being under tarps while it rains!!
Take Care & Stay Cool!!
Marilyn

Oatmeal cookies are my favorite. I don't make them too often, because I eat way too many :-)
I'm glad it's cooled off a bit there. Our weather has actually turned cold the last few days, I had to turn the heat back on!! We've had incredible winds too. That's the part most people dislike about the desert here.
Your living room looks beautiful :-)
Blessings,
Marcia

Those cookies look scrumptious!! And, you living room looks so welcoming and nice! blessings ~ tanna

housework is never ending...it's one of those things done with a numb mind!! Tammy the flowers are called Mountain Laurel and you could so do the Lover's Knot stitch!!!. Things that look hard, never actually are...with a bit of practice.. I have put up a link...go and look when you have five minutes and you'll see how easy it is!!
that cat of yours is so adorable.. have a good week too... :)
M

Beautiful living room. You are one busy girl and even made cookies. You have to be so very organized. 99 degrees, wow, that is hot!

So glad it's cooling down for you. I remember when we lived in the southwestern part of the United States. The hottest it got one summer was 119 dgrees. Thought I was going to shrivel up and die.

I'm not much for hot temps, since I'm a New England girl. You must be quite accustomed to weather in Kuwait by now. I recall reading that you've been there lot time, right?

Jingles has got the right idea. What an adorable cat. Take care and have a good week. Susan

Oh there are hundreds of 'little' things that devour our precious time. There just are not enough hours in the day... Jingles is a smart cat; ours often are in the big planter with the Canary Island palm. So it must feel cool!

When you mention your balconies, it makes me sentimental to want one of my own. When I think of balconies, I think of being up high, with the wind (and I guess dust) there swaying my plants as I water my little balcony gardens.
Brenda

Hi Tammy,
Little Jingles is the cutest kitty. I love the way he is peeking around the flower pot.

Your livingroom looks wonderful. I started some cleaning projects yesterday and I'm worn out.

Have a wonderful week.

Thanks so much for stopping by, commenting and following, Tammy. Just awesome!

I have an orange tabby that looks just like Jingles -- her name is Jack. And I made oatmeal raisin cookies today for my husband to take back to work with him this week.

Great to meet you and look forward to getting to know you better as well. :)

Wow cleaning and rearranging, it looks nice. That's something I need to do around here.... I was just looking at the dust under the tv cabinet while i was sitting in the recliner thinking, "I should do something about that."

thank you for always leaving such wonderful comments for me. your comment on my current post was so encouraging and really made my day.

Your living room is lovely - very warm and inviting.

As is your weather - 99 sounds delightful right about now to me, where it's now been rainy and in the 30s and 40s today. Crazy, yucky weather. But it looks like things will improve this week when warmth will return and hopefully sunshine.

Hope you have a great new week,
Linda

Yum, Tammy! Nothing much better in this world than homemade oatmeal cookies! So glad you had a bit of free time...

Your home is so beautiful--so warm & inviting...love the way you decorate!

Have a wonderful day, dear friend!

Jingles knows how to keep cool. Your house is so pretty, Tammy. Just looks so cozy and beautiful. Diane

Is the haze from dust or from polution? We have what they call inversion here..a weird thing about the cold from the mountian tops mixed with the hear of the vally..mostly in the winter.
The cookies look good--oatmeal is one of my faves! And Jingles is sooo smart! Way to stay cool! Maybe they should make clay pots big enough for us!

my fav...oatmeal cookies, but how do you bake in that weather? I'm lovin' your living room...so inviting...are you inviting me?

Cleaning and rearranging always makes me feel better.
Now, if I would just do that at home too, and not just the store, think how good I would feel!! =)

sweet blessings and have a wonderful week.

Oatmeal cookies!!!! They are one of my favorites along with snicker doodles, peanut butter....... just in case you wanted to know !

At first I thought Jingles was peeking out from the behind the plant pot and then I realised she was actually in it. lol

Your living room is beautiful and looks very cosy and relaxing. Wonderful looking treasures too.

I too spent a great deal of my weekend moving furniture and cleaning and decorating...lots of fun!, but tiring. Now I'm beginning my day not very happy...and there's the rest of the week ahead! :o( oh well. I wish I had cookies to cheer me up ;o)
have a great week ahead!

Sounds like you had a busy but productive day, Tammy! We are still waiting for things to warm up around here - temps are still below freezing at night!
Wishing you a lovely week,
~ Zuzu

What a beautiful, beautiful room Tammy! Could you please send a few degrees this way!

HI TAMMY,
JINGLES IS JUST THE CUTEST EVER.....WE HAVE TWO CATS EMMA AND ALEX....THEY ARE SO PLAYFUL AND LOVING.....YOUR LIVING ROOM IS JUST STUNNING, A LOT OF WORK....YOU DO DESERVE TIME FOR YOURSELF.... A NICE CUP OF TEA AND SOME OF YOUR DELICIOUS OATMEAL COOKIES....YUMMY...RIZZI

That is just how I like to clean, well if like and clean go in the same sentence! I move everything out of the way to sweep under and behind it and before you know it, I've rearranged the whole room! Yours looks fabulous and the cookies look delish! t. xoxoxo

My cleaning spree happened this past weekend plus painting the bathroom and tiling the kitchen countertops. It was productive, but I'm exhausted! Have a great week!
Kelly

Even your day at home leads to being busier than someone who spent the day out and running around. The house looks lovely. I love all the rearranged furniture. You have no idea how much I wish I could pop by to see it for real. Your oatmeal cookies look yummy. I wish you could find agave nectar so you could try my version of oatmeal cookies. They are yummy!!
As I am writing this, my Itunes that I am listening to played "Isn't It Ironic". You and Melissa have spoiled that song for me forever. Every time I hear it, I see us stranded by the side of the desolate road with a big rainbow hanging over our heads. Inshallah, I will never forget that day...

Missing you and Melissa a ton today!!!!
Love, Renee

No matter how many times I go to your place, you always manage to make it look like you got new furniture. Summer days are here but the worst isn't. Stop showing pictures of food...it makes me hungry. I just made a batch of choco chip for my kids in school. They've been working hard so I surprised them to show that mine are better than that Chewy Kewy place.....they agreed....plus, the spoiled ones got popcorn too!
Funny how Renee mentioned the song. Just heard it the other day on the radio. That song will always hold a special meaning to , though traumatic also:) Wishing you a wonderful week.