Tonite I attended the 2nd meeting of Kuwait Textile Arts Association held at The Sadu House. 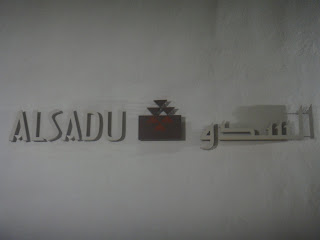 Our presenter for the evening was Dr. Ali Saleh Al Najadah who spoke about Sadu Looms: The Untold Stories. 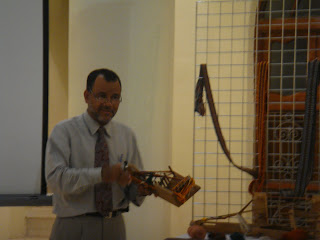 Sadu weaving is traditionally done on a floor loom, but in 1997, Dr. Al Najadah designed the vertical loom so that weaving could be done in a much more comfortable position. 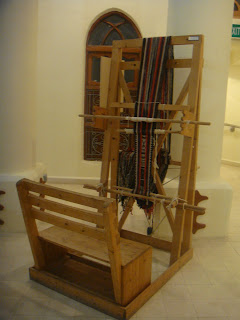 These are Inkle and Primed looms. 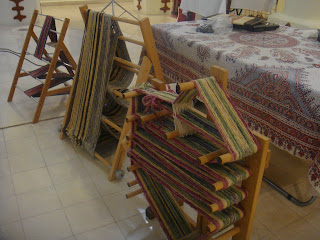 Dr. Al Najadah designed a smaller version of the Inkle loom that is easily transported. He said he made it just the right size to carry on an airplane. It can be placed on his lap and he is able to weave to pass the time. Of course, he draws much attention when he is seen doing that. 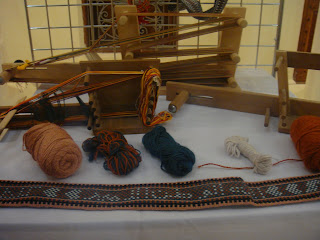 A sample weaving made on the Inkle loom. 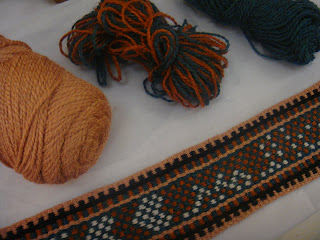 Weaving workshops will be starting in a couple of weeks, but unfortunately, they are held weekday mornings and I will be working.

I hope everyone is having a productive and pleasant Tuesday. Friendship blessings, Tammy
Posted by Tammy@T's Daily Treasures at 10:02 PM

How interesting!! Like those interesting workshops you can't attend, I have also found really interesting craft workshops I am not able to go to because of hours and days: weekdays at working hours :o( ...the luck!
have a lovely day!

Wouldn't that be fun to learn? Sorry to hear you are not able to attend. Darn!
I'd love to see the passengers on the plane when he unfolds his weaving loom. THAT must prompt some interesting conversations. I'd actually love to sit by him and watch, wouldn't you?
Thanks for sharing. It's truly interesting.

BTW, how did the Devon Buttons come out? I STILL can't find those plastic rings, but am still searching so I can give it a try!

This is interesting...right up my alley. Sorry to hear about your Uncle...sounds like you have some wonderful memories~ Take care tammykins~

aw..i hate when that happens...i just wrote out a comment but it didn't go through..or at least I'm pretty sure it didn't....

well to paraphrase it....
I think I'll stick with my crochet passion..it seems like a way less complicated way of passing the time for me! lol

glad to hear you're enjoying the meetings....but too bad you'll have to miss some...maybe you can call in sick! play hooky!?? yes? no?

What an amazing art! I can't imagine being able to do that. Such beauty!

Wow..it's amazing to see the tools and the finished product. Yarn and talent and tools can turn the ordinary to the EXTRAordinary :-)

oh dear, it would be fun to learn, wouldn't it? and you are so talented!! xx's

Tammy,
Wow, thanks for the pictures and info. It is so interesting to see how things like that are made. It makes you really appreciate it all the more. Too bad you couldn't miss work and go:(
Thanks for stopping in~can you believe it ALL those magazines for less than the price of one Martha mag at full price? I love it when I find good deals like that!
I hope you have a great day~
Blessings,
Sonya