Quite often, I choose to distance myself from the news of the day in order to preserve my sanity.  Unfortunately, I did not feel I had the luxury to look the other way when events began to unfold in Palestine and Israel more than a week ago. 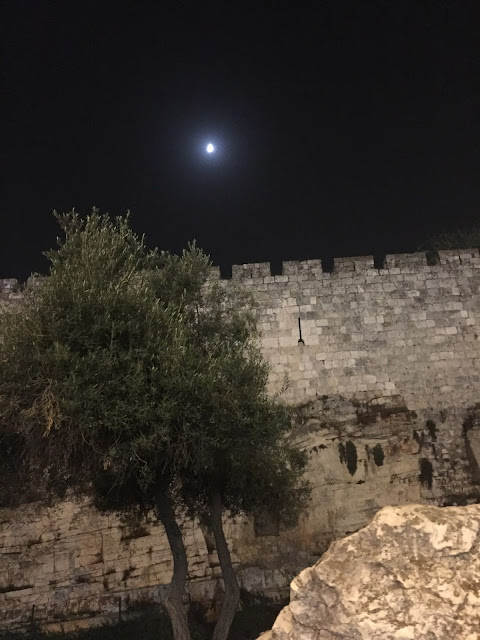 Moon over Old City Jerusalem, November 2019
If you follow international news, then you might be aware of the military assault aimed at Gaza (though possibly not all the events leading up to it; that, I guess depends on the coverage of such events where you live).  On the other hand, you may be like me and doing your best to stay away from all news that is bad news. 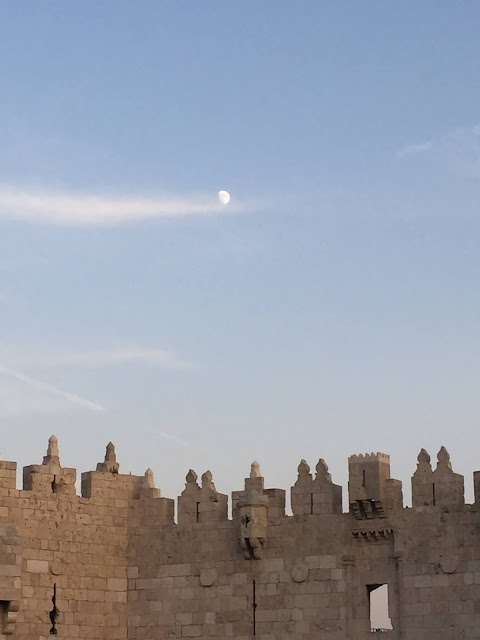 Further proof of my love of the moon, Jerusalem, November 2019
For those of you who don't know or might not remember, my husband is Palestinian-American with a large number of family still living in Jerusalem.  We normally would go there once or twice a year to visit them, especially his aunt (whom he talks to nearly every single day by telephone) who is 90 years old, but obviously that's not happened in awhile.  Our last visit there was November 2019. 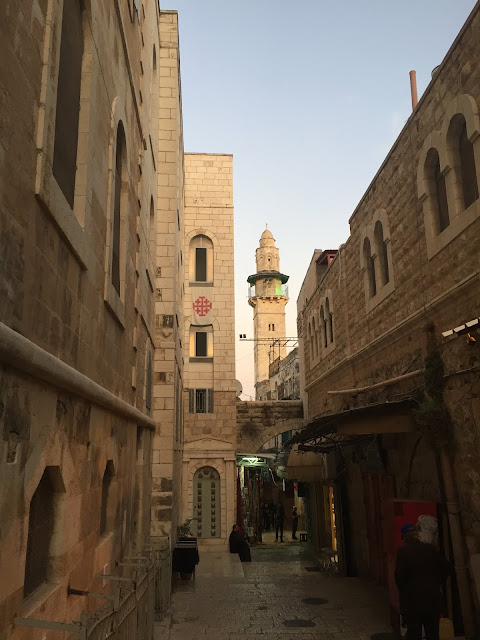 When the pandemic and lockdowns started, she kept asking when she would see us again (note: she has been blind since the age of 2 because of some sort of explosion; we don't really know the exact story).  It took a lot of explaining for her to finally realize that it's not that we didn't want to come, but we literally can't because of everything going on.  We had hoped that with vaccinations, at some point things might start to open up and we could maybe, possibly get there by the end of this year, but with the recent attacks and unrest, that seems highly unlikely. 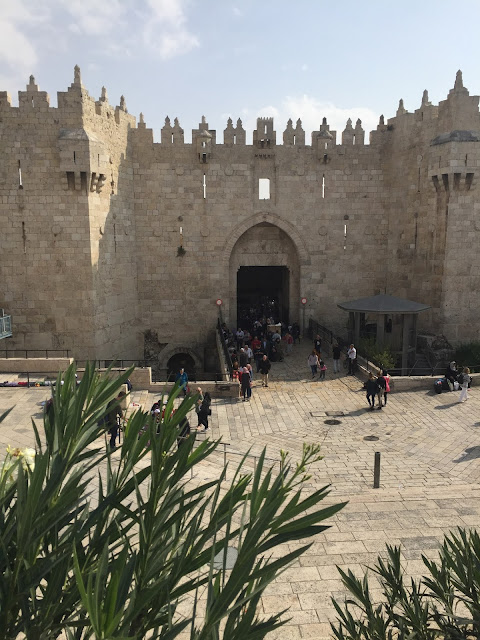 Damascus Gate
This land, considered holy, has been subject to much strife for centuries and yet I've never delved into the true history of the area.  So, with everything that's been going on there and across the world, I've decided that it's time to educate myself on matters of importance rather than sitting on the sidelines feeling that there's nothing I can do. 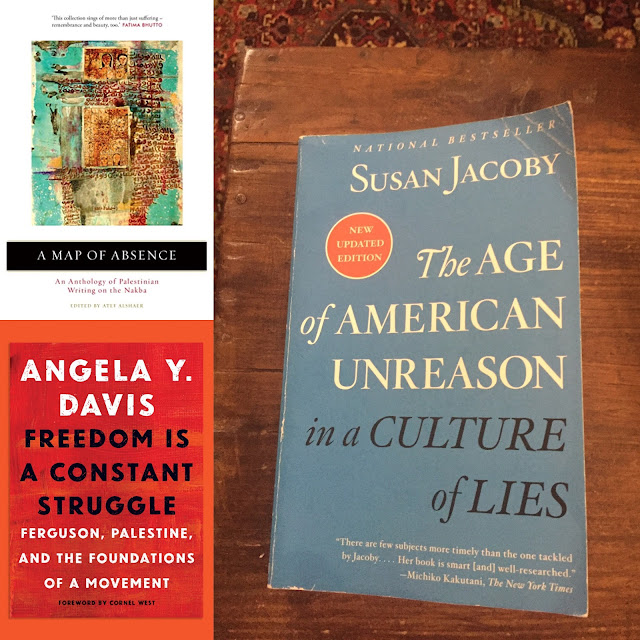 On Thursday, I finished reading Freedom is a Constant Struggle and The Age of American Unreason, both of which opened my eyes to moments in history that I might have heard of briefly and others that I knew absolutely nothing about.  A Map of Absence is short stories and poems by established authors and emerging writers from the time before and after the Nakba which was the mass expulsion of approximately 700,000 Palestinians from their homes in 1948.  This is the first time these writings have been translated from Arabic into English.
Some of my recent posts have mentioned the anxiety I'd been feeling, like a dark cloud was over my head and a low grade depression was seeping in, but I have to admit that a fire has now been lit to learn, grow, evolve.  That's my misson each and every day.
Sending many blessings and good wishes your way.
Take care.
Posted by Tammy@T's Daily Treasures at 4:09 PM

it is a very complicated situation in the middle east; we are used to the us and them (good guys and bad guys) line of reasoning and it just won't happen there right now. And I'm glad to see you are reading about it--you sure won't hear any unbiased news from the media. I feel for you and the first person reality of this situation. God knows.

Dearest Tammy,
That is a big reason for feeling depressed and especially due to a person being blind. There are no other options for having any contact I guess...
Really hard on people's personal lives. So many human beings just want to live day-by-day in peace while enjoying the little things that life offers us. Family, friends, food and nature's beauty... Maybe a pet to love and care fore?
We all have to pray hard that these uncertain times end soon!
Hugs,
Mariette

So touched by your post Tammy. It's such a difficult situation. Many many opinions depending where you stand politically and biblically. This world has always been a war in one way or the other, and it will only end with final battle at the end of time.
I love readying your posts, and feel for your hurts. Saying prayers and sending love.

Cara Tammy, now everywhere it is difficult time, we should think that it will be better and peace everywhere, a lot of huggs, greetings from anna

I do try and keep up with the news and I was really upset to hear about the fighting especially since the Israelis started it by evicting people from Jerusalem that were Palestinian. I don't understand the history either and I appreciate those book titles! I would like to learn more. Even before this though I could never understand why the U.S. stood with Israel all the time. I know they consider Hamas a terrorist group but in my mind, the Palestinians have been pushed around for years. I do not like Netanyahu(SP) and never have. I think he's a crook and a bully but what do I know? I'm just going on instinct. I hate bullies and I will always stand up for the underdog and in this situation, it has been Palestine for a long time. Is it the Jewish people in the U.S. that push our leaders here to back Israel all the time? Bernie Sanders and others are starting to speak up about it and I hope they continue. The Palestinians need people to stand up for them.

Hello dear Tammy. I had wondered if any of this was affecting your family. It's so hard to know the right and wrong of it when the news only tells us what they want us to knnow and it's obviously very politically biased and they don't even try to hide that fact from us.
I'm praying for an end and complete calm in praying these things.
Blessings,
Betsy

I can't imagine the sadness that your husband feels for his homeland. I hope that the cease-fire will hold. You and your family will be in my thoughts. Your husband's aunt must be absolutely terrified. I pray that she remains safe.

Hi Tammy. Oh, the news around the world is most upsetting, that is for sure. But it was wonderful to see you visited my blog and commented, too. Thanks so much. Keep positive and grateful. That's what I try to do in my every day life. Hugs. Susan

As an American, I can't understand why we are choosing to finance the weaponry for one side of this. I know there are two sides to the story and it goes back generations, but it seems like one side is armed with rocks and the other with state of the art weapons and bombs. You need only to look at the injuries and deaths. Those living in Gaza have now lived there for generations. Where are they supposed to go? And the blockades of medical and food? I find this all so upsetting. Prayers for your family.

Such a difficult situation for us in Europe to understand and I think the European news coverage is biased. If only something would happen (change of leaderships) to bring Peace to the region.

Tammy - I admire your desire to learn about the history; often, it is the only way of unraveling a way forward. I am anticipating learning from you in your coming posts - but no pressure :-) I can only imagine how difficult this is for your husband and his family.