The Past Few Weeks 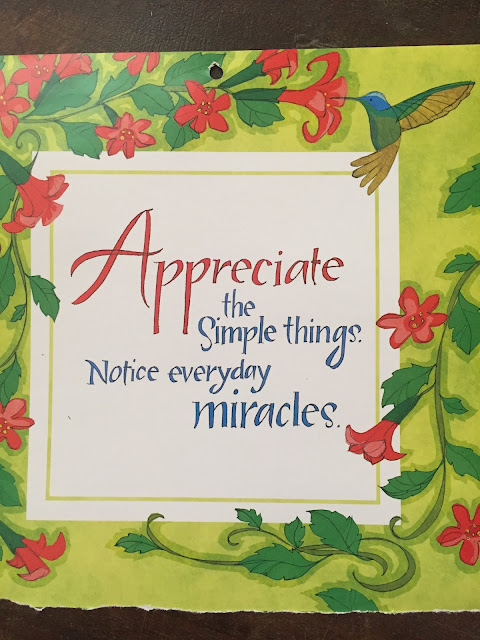 The above quote comes from an old calendar I found while doing some organizing. 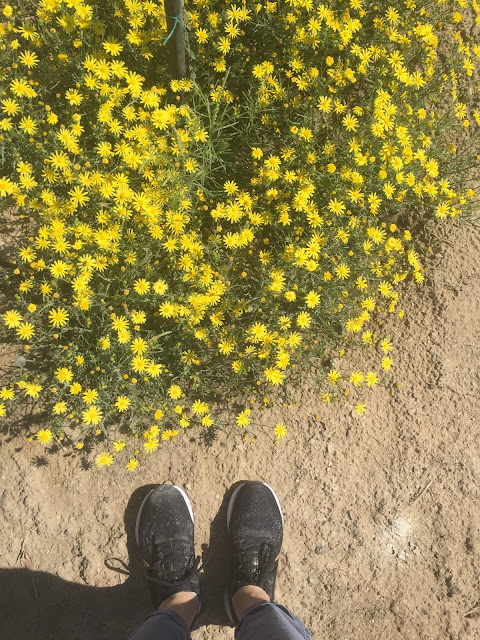 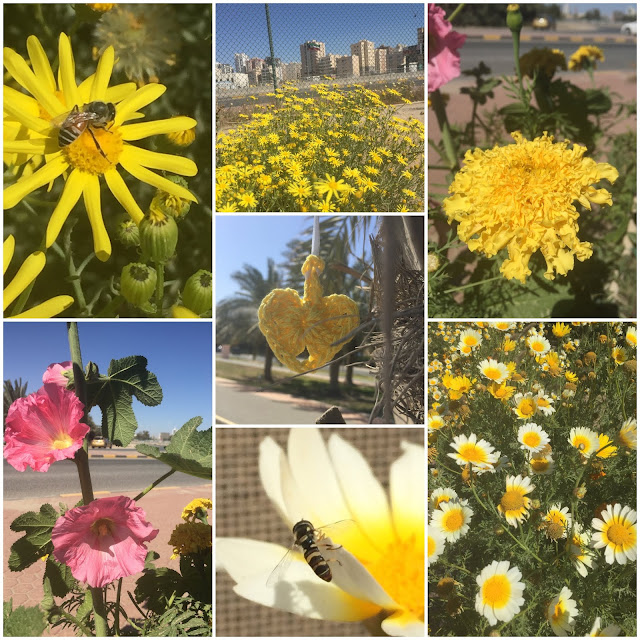 On February 24th we were supposed to be winging our way to Bangkok, Thailand but cancelled because of uncertainty around Coronavirus.  It's a good thing we did since flights from there were barred from entry early on so we would have been stuck if we had traveled. 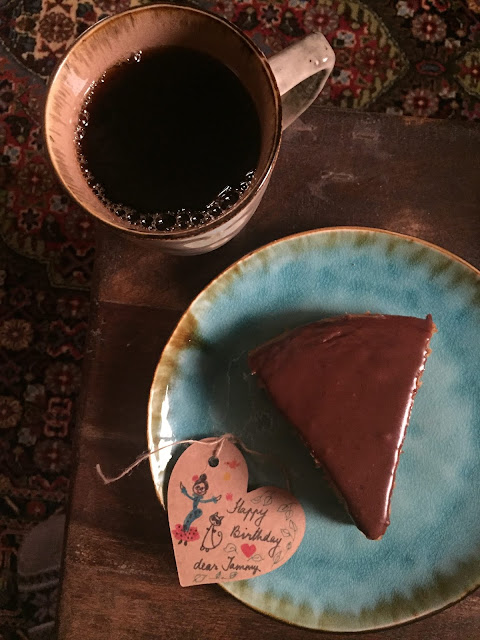 My birthday on the 26th was a quiet day spent at home.  I made myself a vegan vanilla cake with chocolate tahini frosting.  The handrawn heart tag came with gifts (which included the plate and mug shown in the photo) from my friend, Aruna.

On Thursday, February 27th, this sweet kitty showed up in our parking area in pretty bad condition. 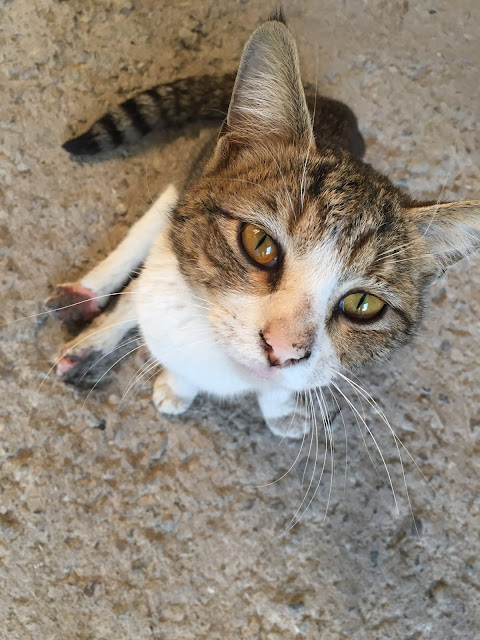 He obviously had some kind of trauma to his backside but was managing to still get around.  He would swing his hips around, balance himself and then shuffle along, but his back toes would flap backwards and it was so very painful to see.  I thought he might even have rectal prolapse because his whole backside seemed to be bulging out. 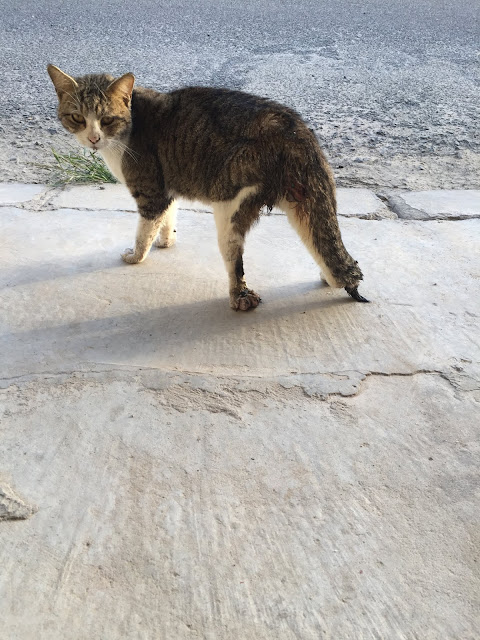 Because it was the weekend and a national holiday here, all I could do was take care of him the best I could.  I reached out to friends and animal rescue groups for support.  We posted his story on Instagram.  He was unable to control his urine or bowel movements, so I cleaned up after him and bathed him a couple of times a day. 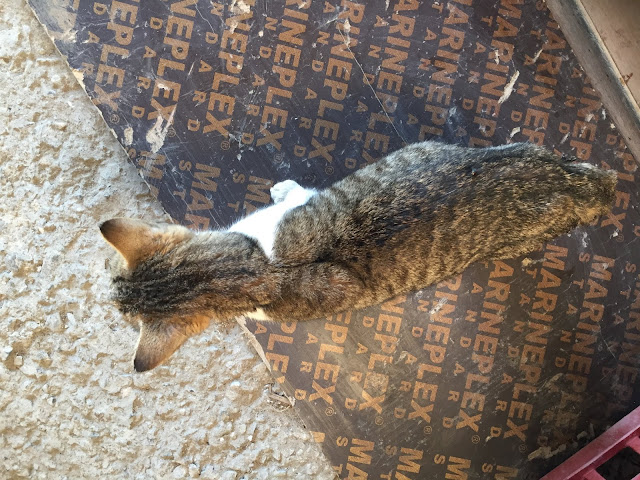 Last Sunday I was finally able to get him to the vet who felt that he would have a long recovery as his paws and backside were so badly inflamed.  But then, after a 24-hour stay and an x-ray, it was determined that he had a spinal fracture that had not healed properly.  You can see in the picture above where the spinal fracture started; his back end so weak and thin.  Surgery would be costly with only 10-20% chance of success.  The vet felt strongly that for the dignity of the cat, euthanizing was the right thing to do. 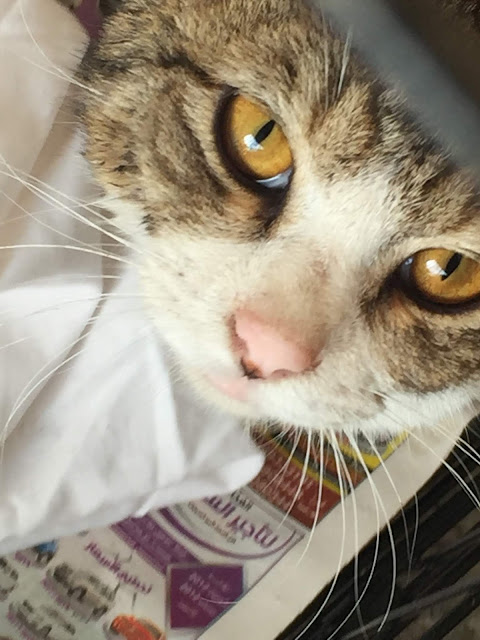 I had named him Tai, as a nod to the fact that if we had been in Thailand, he would not have been able to find me.  The diagnosis broke my heart but I truly believe that sometimes animals come to us so that we can help them heal, and other times they come to us so that we can ease and end their suffering.  It's always such a hard decision and I cried my eyes out, but so many people posted messages of encouragement and that helped me immensely.

Because of Coronavirus, schools have been closed.  This is week two.
Gatherings have been discouraged so there's been no Kuwait Crafters meet-ups. 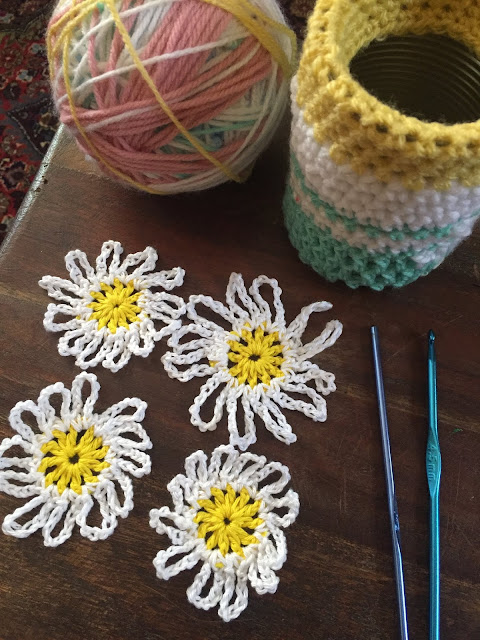 I haven't really been much in the mood for making, but am trying to start some simple projects.

Hope all is well with you.

Oh Tammy.. what a sad story but you did the brave thing by giving him a happy time during his last days. I'm glad you didn't leave on that trip and get stuck somewhere else. ((hugs)), Teresa :-)

How very sad the story of your rescue cat. How easily they grab our hearts. I still miss our Molly that we had to put down last June. It was necessary, but that doesn't ease the pain.

SO sorry for you loss Tammy, but I feel he found you so you could end i=his suffering. Bless your heart for trying all you did for this sweet baby.

You have such a tender heart. Tai was well cared for and loved during his last days, and that is thanks to you, my friend. Belated Happy Birthday. I hope the "self-isolation" requirement does the trick and you will be able to meet again with your friends.

Oh Tammy, what a sweet thing you did in taking care of that beautiful kitty. You did the right and loving thing and I believe as you do that you were meant to be home where he could find you. Thank you for being the wonderful human being that you are.
I'm glad too that you were home and not in Bangkok where you many still be had you flown. Alex is in London and doesn't know if he'll be able to go home to Tokyo. It's bad in both places right now. I've been called by my cardiologist as apparently I'm in a high risk group. He advises not being with more than 10 people, so we watched a live stream of Mandy's church in Omaha this morning. We did go out for two walks because it warmed up into the high 40's and was just too nice to stay inside all day. Dennis is still going to work daily but I'm staying home much of the time, only going to grocery shop once in awhile. It's a bit scary but I'm glad I'm a homebody and staying home doesn't bother me.
Stay safe and well my friend.
Blessings,
Betsy

Hi Tammy, It was very accurate that your trip did not take place. We are very nervous, I wish something terrible, the vaccine is found without any loss of life and precautions are taken. I am even more sorry for the cat :( who knows what happened to you, fortunately you have been the best thing that happened to you in the last moments you came across...

It's heartbreaking when you can do nothing more for an animal whether a pet or a wild one and a decision has to be made for the vet to end its suffering. We've experienced that too. You were kind to Tai and would have sensed that, but I understand your sadness. The global situation with the virus is difficult and containment is necessary. I'm glad you didn't travel and get stuck abroad. Stay safe and well Tammy.

Hi Tammy,
Happy belated birthday! The virus has stopped many (happily planned) travels and what can one do but adhere to the advise of the WHO? We are just discussing that here schools should also be closed, but they aren't. Maybe the reason is that there are not many cases reported here. We hope for the best in this case.

Hello, I am a new visitor and follower of your blog. Sounds like you have been hit hard by Corona Virus there. I think it is only a matter of time before we are in a similar condition here in the states. Belated Happy Birthday. Very hard to put animals down, but when they are suffering, it is the right thing to do. Have a good week.

You not only released that strong-hearted kitty from a life of suffering, but you provided him with care and surrounded him with kindness and comfort and companionship during his final days. Because you are also strong-hearted.
Happy birthday, Tammy - you ARE the gift.

Dearest Tammy,
Yes, there is no doubt that Tai was meant to meet you after all the suffering he's been through.
We often wonder how neglectful people can be and God forbid, if this injury was inflicted as an animal abuse...
Traveling right now can be quite tricky.
Wishing you a very happy, belated birthday. That chocolate Tahini frosting sounds yummy and HEALTHY too!
Hugs,
Mariette

The cake looks good--and the plate is a lovely shade of blue. I like all your yellow and noticed your sweet crocheted flowers on your IG. Belated happy birthday.

Tammy - first of all, belated Happy Birthday! So sorry to hear about Tai - I am shedding some tears for him and you as I try and type this. It is hard to make that decision for any animal … So far, we have no cases of coronavirus in Montana, but it is affecting Ohio, where our kids live. Our son's university is on spring break right now, and will conduct only virtual classes until at least the end of March. Only time will tell if this will affect his graduation and our plans to attend it!

So Sorry about Tai, but I feel you brought so much love to his life even if it was for few days.
I have been following updates on Corona Virus in Kuwait.Certainly Kuwait govt. is doing better than Indian govt.
Your simple crafting is so beautiful.

We just got home late last night from California so I'm just now getting caught up on some blogs. First of all...happy birthday! Your cake sounds delicious. I love tahini, but have never heard of it being used in a frosting. I'm going to Google that recipe.

I cried when I saw the photos of that kitty, especially since he looks so much like my Zippo that passed away Nov 2018. And then when I read that you had to have him euthanized, it made me cry some more. You have the most incredible, tender heart...thank you for taking him in and giving him so much love and needed attention and care. Many blessings to you.

Your friend did you proud - I love the plate and mug and the little heart is so darling. Happy Birthday! And, at the same time, condolences, I know the pain of losing a beloved pet.
Amalia
xo

Thank you SO much for helping this poor kitty. I know it was so hard, but you did the right thing by him. It pains me to think how long this baby was in pain.

Happy (belated) birthday too. Hope you had a day of celebration.

Two Cables and a Frapp said...

Happy Belated Birthday ! I'm a February baby also. Glad you made it home without catching the virus. I love the coffee mug and dessert plate and that cake looks so good ! Very upsetting about the kitty. The little flowers you made are adorable. Very nice blog.

Happy Belated Birthday wishes to you! What a shame but also a blessing that you could not travel. I am so sorry about your new friend Tai and the trials you both went through. Heartbreaking. Wishing you good health and safety as you 'shelter in place' through this wretched pandemic. Reaching for your crochet hooks and sketching pencils is a good way to nurture your soul. Thinking of you. xx

Oh Tammy, I was hoping for a happy ending for your little visitor. Poor thing. Thank you for doing all you could to help him.

Those yellow flowers look so cheery. Hope you and your family are keeping safe and well.