In my previous post, I showed the two blankets that I crocheted for donation to a refugee camp at the end of the month. 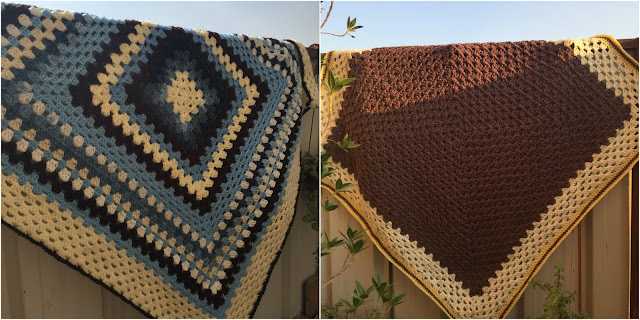 Blog friend Angie from Letting Go of the Bay Leaf mentioned that they looked to be pretty big baby blankets, but I think the photos are a little deceiving.  Both of them measure about 35 x 35 inches.  I used to make rectangular blankets but granny squares are so easy and rather satisfying to make.  I'm just never really sure what size they should be.  Any thoughts or guidelines in that regard?

In addition to these two blankets, I managed to crochet three chunky scarves using the Vanilla Bean Scarf pattern by Fiber Flux. 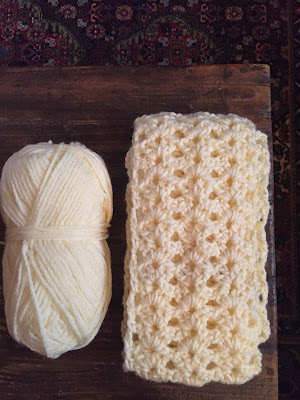 And with some of the leftover yarn, I was able to make two adult sized chunky hats. 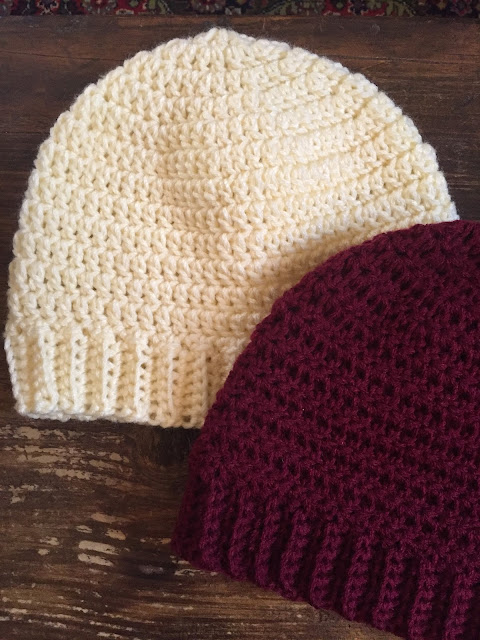 For these I used a pattern posted by my friend Teresa Kasner but knew that I wouldn't have enough yarn for a rolled up brim so shortened that portion of the pattern to 7 chains rather than the 13 called for. 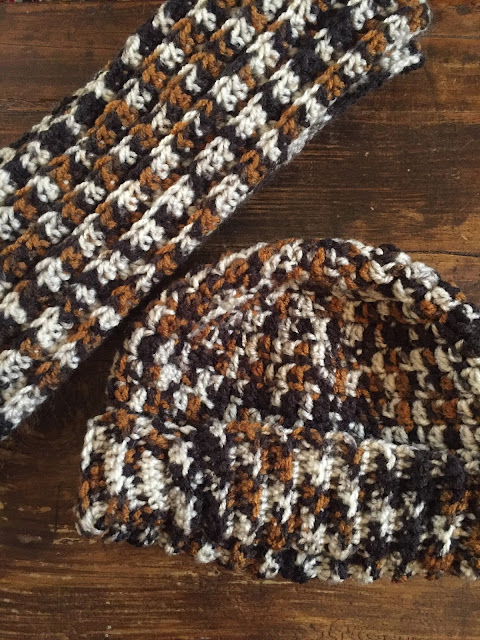 I always find it difficult to crochet scarves for boys/men, but had two skeins of this variegated yarn that I wanted to use.  The scarf took one entire skein and is made using hdc in the back loop only which gives a nice ribbed effect.  The hat is made using Teresa's pattern, this time with the rolled up brim, and I think both should be suitable for a boy aged 9-11. 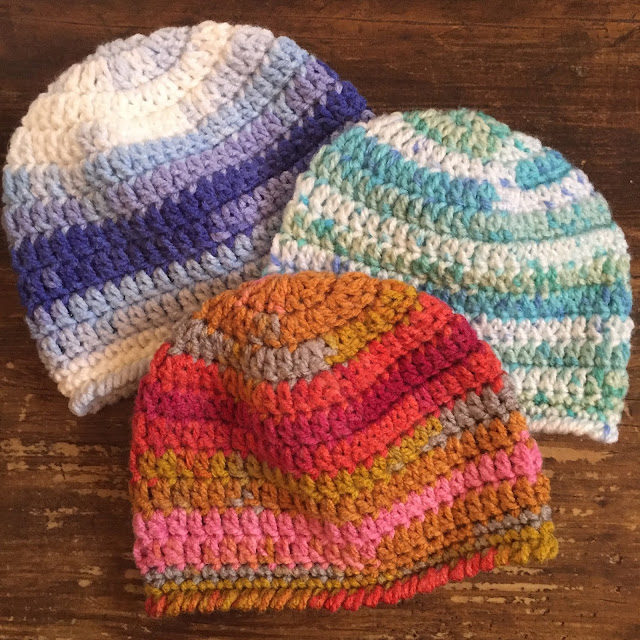 I also made three baby hats (again, I think the picture has them looking much bigger than they actually are).  I used a printed pattern that Val from Yarni Gras shared with me a few summers ago when we sat together at a Starbucks in Slidell, Louisiana and crocheted hats for a young lady who was working on getting her Girl Scout Gold award by collecting hats for children with cancer.  The original pattern found at Classy Crochet has a stripe and a bow but since I was using variegated yarn I just kept it simple.  This is the first time I managed the crab stitch on the edge so am quite happy with that.

Posted by Tammy@T's Daily Treasures at 10:02 AM

I'm sure they will ALL be very much appreciated!

Beautiful creations, Tammy! I love that crab stitch edging! Looks great! You do beautiful work. I think your choices for the boys work well. All will be appreciated.

Yes, that was the "one day" snow! Ha! We were playing golf in shorts the day before, woke up to 22 degrees and beautiful snow! So we were able to enjoy the best of both... sunshine and snow. ;) blessings ~ tanna

Beautiful creations and I'm sure very much appreciated by those who receive them.

Your crochet work is gorgeous!
I only know how to do the simplest crochet stitch, which is what I'm using on my little wine cork Christmas trees. It's good enough for me for now though as I don't have the patience or want to craft much.

Oh my goodness Tammy! What wonderful gifts for people. I just know they will be so very appreciated. It warms my heart when I see so much knitting and crocheting for others happening. Joy. That's the word.
About the baby blankets. The hospital asks for 36x36 inch for newborns and 28x28 for preemies so I think yours are absolutely perfect my sweet friend. Thank you for sharing your gift with others.
Blessings,
Betsy

What wonderful and cozy items you have created. They are sure to be well appreciated. Where do you send them for distribution?

Wow! You have made so much in such a short time and everything is really lovely. I especially love the creamy vanilla and rick plum colours in your scarves with matching beanies but the variegated colours look good too.

Regarding questions of size, when I was first learning, I took a lot of guidance from professionally published patterns. Ravelry is a great place to check the details of other baby blanket patterns because there is room to list the completed size. Your library may have books dedicated to baby blankets (Candi Jensen has authored a few) which may contain more discussion about the necessary attributes for an excellent baby blanket.

If you are looking for more hat ideas, I have just posted some photos from a local beanie & beret exhibition on my blog (Lupey Loops) this week to inspire you further.
It doesn't look like you are short of ideas though! Enjoy beanie season.

You've been very busy crocheting and it's wonderful that you do this, Tammy. I especially like the colorful hats.
xo Julia

Wow you have been so busy and productive--love everything especially the scarves does it get cold there?

You have been very busy, my friend! How artistic to display the scarves in your garden - like something right out of a catalog! Enjoy the rest of your weekend!

Wow, you made some great hats, Tammy! Thanks for the shout out. I've been making those hats for family.. 7 so far! You're the most giving person.. I love that about you! ((hugs)), Teresa :-)

Oh how pretty those hats are! What a great project. :) Kit

Your crochet projects are always so beautifully executed. I like your Granny Square and size for a baby blanket. Crochet Bliss Dear...<3

Lovely hats, scarves and blankets! I have never made a crochet item of clothing, must try one day. I think blankets can be of any size you like, the babies sure aren't going to measure them :-) Have a lovely weekend. x

Your crochet work is beautiful and how kind of you to donate your work to people who truly need these things.

Well look at you completing all of these wonderful projects. You have been busy. I think blanket can be any size. Babies need smaller one, so 35 x 35 sounds perfect to me. I love a good granny square, it is just so easy and fun to make. Hope you are enjoying the weather and the sunrise my dear Tammy.

She loves to crochet said...

Wow, you have been so productive, they all look lovely and cosy and the colours are fab. I don't think it matters too much what size you make the baby blankets. The last few years I have made blankets smaller than before to use with the baby car seats as travel systems are popular. Hx

Dearest Tammy,
Wow, you sure are graduation from Crochet-College!
My, I could hardly believe you having mastered that crab stitch too and I just LOVE the edging of those hats, they look so professional and really nice. The brown variegated are perfect.
And your blankets are of a generous size for many uses.
Sending you hugs, we both went to Perry, GA to a Mistletoe Market where we did perform with our choir. Pieter came along and we enjoyed the singing.
Mariette

These are so lovely and you picked the perfect yarn for each one of them. They will be much appreciated.