My friend Sheryll is the founder of Operation Hope. Yesterday I posted about the Mother's Day Breakfast that she has been organizing for expats in Kuwait over the past 16 years. 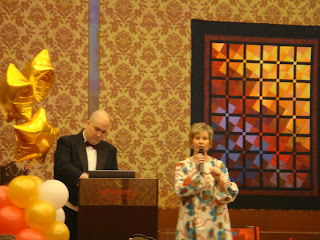 I first met Sheryll when Yusef was one. We went to a holiday bazaar where she was selling her book ... 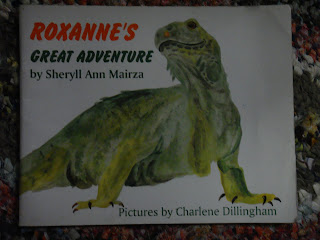 which she signed to Yusef. 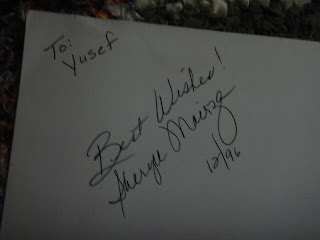 Our paths crossed again several years later when we were on the American Women's League Board together, but we didn't become friends at that time. Four years ago when I decided to quit teaching and wanted to do something meaningful, a mutual friend suggested contacting Sheryll. I'm so happy I made that call as so many new doors were opened to me when Sheryll and I forged a friendship.

The sweet kittens I rescued are living with Sheryll and being fostered by so many loving hands at her place. They are still doing well although they've had a bout of loose bowels lately.

This is Sheryll's Grandma who turned 89 in January. She is holding Percy. 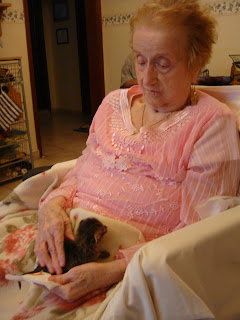 Sheryll has decided to adopt little Percy. Isn't that just the sweetest face you've ever seen? 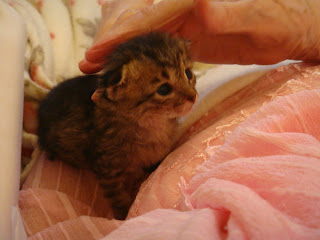 And this is Scout who protects the kittens. 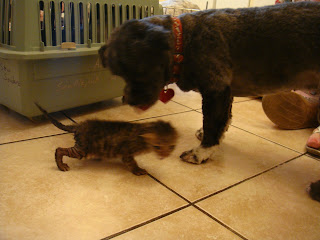 And Mitsy who loves to lick the kittens clean. 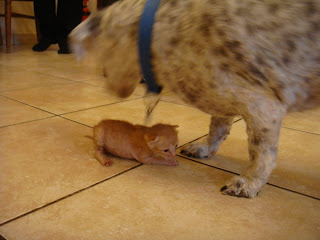 I'm so thankful God placed Sheryll in my life and I am privileged to help with Operation Hope in any small way that I can.

And now abideth faith, hope, charity, these three; but the greatest of these is charity.

Wishing you all much beauty and many blessings in the week ahead. Tammy

What a lovely story..and so glad the kitties have a great place to go..Percy is just adorable to say the least...happy day.

what a cute post...what an adorable pet family that is....I just love seeing dogs and cats get along! you would think people would do a better job of getting along, if they can do it? right! lol

Oh my, Tammy, that little kitten's face IS adorable. Just adorable. I'm so happy you have Sheryll as a special friends. That kind of friend is like an angel on earth. Sincerely, Susan

The world is a better place with you in it.

I just love those kitties.... Thank you to you and Sheryll for all the work you do...spreading the good karma...Peace out!

Tammy, thank you for stopping by and paying me a visit and your kind comments about my blog. What a delight to come by and visit you! Sounds like you found a delightful friend (for life!). What darling kittens and to know you are helping out. I love the picture of Sheryll's grandma with Percy. You have a wonderful week as well. God bless....Patti

This story is so inspirational! I think the sweet face belongs to Grandma as well as Percy!

You were supposed to be friends, it just took a little while. She sounds like a lovely person. The little kittens are looking so sweet. They have much love, you can see that. Blessings to you, Diane

Lovely post and glad that you and Sheryll became friends. How sweet the little kittens are and their minders and that they are looked after so well.

It sounds to me like you two were meant to be friends!
The kittens are adorable, they do have the sweetest faces!
Thanks for stopping by my blog for a visit. Hope you have a wonderful week.
Jane

Oh - bless you for rescuing these adorable kittens. It looks like they're in good hands ;)

What a wonderful and touching post. Thanks for sharing.

Tammy , you have such a big heart! One of the reasons I love you so much:)
Your table.. ha! Looks like the table at the cabin, years ago.. when all you and I did was scrapbook.
Hope you are having a great week!!
Love,Gwen

What a lovely post. I especially enjoyed it because after all I have heard about Sheryl and Operation Hope, I finally got to see a picture of her. She looks like the very special person that you have told me about. It is funny how sometimes, all it takes is the right situation for a friendship to bloom.
The kittens sure look like they are doing well,and yes, Percy is precious. I can certainly understand why Sheryl wants to keep him. Keep the pictures coming. They are getting cuter by the day!!

that is wonderful! I love those kitties!

Dearest Tammy, your post today has blessed me so profoundly ~ thank you! Reminds me of the verse out of Jeremiah 29:11, "For I know the plans I have for you", says the Lord, "plans to prosper you and not harm you; plans to give you hope and a future." He made you. He made me. He made those kittens. He placed all of us together for "such as time as this". Big hugs and much love, Sheryll ;-)