I hope everyone is having a wonderful weekend. My weekend hasn't turned out quite like I expected. Seems I've been much busier than I anticipated and, therefore, have not gotten to all the fun stuff I wanted to do. Zack had a scrimmage game last nite and practice this morning. And the rest of my time has been spent tidying up, washing, drying, folding clothes, all those mundane things of homelife; grocery shopping, cleaning, repotting trees and plants, dusting, fixing all day long. I finally decided to take a little break.

"Housework is something you do that nobody notices until you don't do it." ~Author Unknown

I thought today I would share with you another part of the world that we have been fortunate enough to visit.

“I have wandered all my life, and I have also traveled; the difference between the two being this, that we wander for distraction, but we travel for fulfillment.” (Hillaire Belloc)

"Petra, the world wonder, is without doubt Jordan’s most valuable treasure and greatest tourist attraction. It is a vast, unique city, carved into the sheer rock face by the Nabataeans, an industrious Arab people who settled here more than 2000 years ago, turning it into an important junction for the silk, spice and other trade routes that linked China, India and southern Arabia with Egypt, Syria, Greece and Rome."
"Entrance to the city is through the Siq, a narrow gorge, over 1 kilometre in length, which is flanked on either side by soaring, 80 metres high cliffs. Just walking through the Siq is an experience in itself. The colours and formations of the rocks are dazzling. 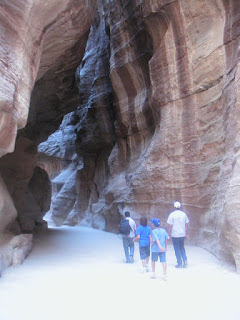 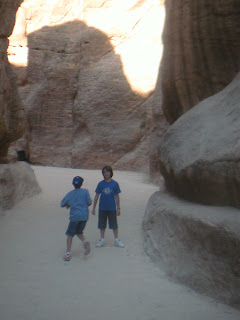 That's me peaking out from the side of the cliff. 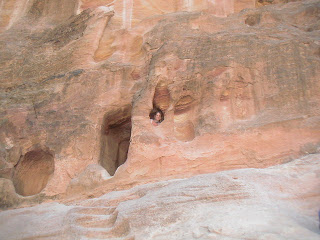 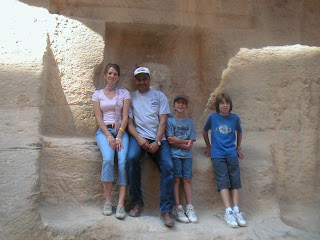 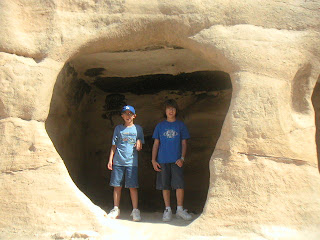 As you reach the end of the Siq you will catch your first glimpse of Al-Khazneh (Treasury)."
"This is an awe-inspiring experience. A massive façade, 30m wide and 43m high, carved out of the sheer, dusky pink, rock-face and dwarfing everything around it. It was carved in the early 1st century as the tomb of an important Nabataean king and represents the engineering genius of these ancient people." Petra is also known as the Red-Rose City. 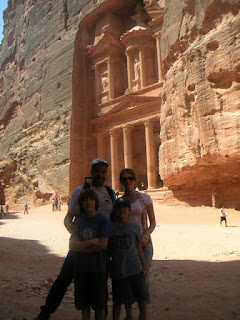 "As you enter the Petra valley you will be overwhelmed by the natural beauty of this place and its outstanding architectural achievements. There are hundreds of elaborate rock-cut tombs with intricate carvings - unlike the houses, which were destroyed mostly by earthquakes, the tombs were carved to last throughout the afterlife and 500 have survived, empty but bewitching as you file past their dark openings." 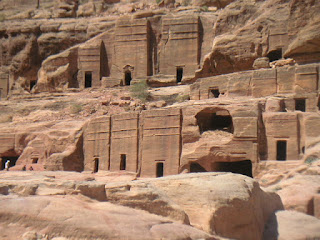 We took hundreds of pictures while in Jordan. There's so much history to be found there. I will be sharing more next week for Sightseeing Saturday (since I ran out of pinks for Pink Saturday. Ha!)

"No one realizes how beautiful it is to travel until he comes home and rests his head on his old, familiar pillow." ~Lin Yutang

Back to cleaning so that I can finish early, walk with Sam, make soup for dinner, take a bath and then crochet the night away. Peace & blessings, Tammy
Posted by Tammy@T's Daily Treasures at 8:41 AM

Tammy--I will gladly sent tons of snow and then you will not be out on the deck in shorts. ha. Hope your day gets better. Hugs Aunt Elaine

This is Lisa from Vintage Handmade. I couldn't see a link to email you so I thought I'd leave a comment about the Cherry Tassies. I would like to mail you all the ingredients including the extract, etc. Please send me your address so I can box it all up for you.

No problem, I can see that it would be hectic to get packages there. Are you military?

Wow, what a magnificent place!!! I love all of the family photos, as well. Looks like a really fun day was had by all.
Xo,
Tammy

Just curious - do your boys realize how significant and deeply moving the places are that you and their father take them to on your travels? I find your photos to have great impact on me when I take into account how ancient and important the ruins are - remarkable, just remarkable.

Children often don't appreciate what is right under their noses. My boys grew up on the shores of Lake Superior. It was right out their front door; however, it wasn't until they grew older that they completely understood how fortunate they were to wake up each morning to view one of the Great Lakes.

That looks like an amazing place Tammy. Those tombs...wow! That photo is beautiful. It must be life changing to see all those wonderful far away places. Hope you are having a wonderful day today!
Hugs~

Wow that is so amazing! Thanks for sharing the history and photos. Looks like a good time was had by all! And don't worry about the things you want to do, they will still be there for you tomorrow.

Sounds like a lot of what I did ~ housework, it always need to be done.
What a magnificent place Jordan must be ~ I loved seeing your photos and learning some of the history.

Have a wonderful weekend
Hugs
Carolyn

Wow, Tammy, how awesome you were actually there. Petra has always fascinated me. I didn't realize the rock was rose in color - how extraordinary. And it was carved in the first century? Amazing.Hope you got lots of crocheting time in :)
Happy Hooking and Pink Saturday ;)

It looks wonderful there. Back in high school I dated a guy from Jordan...he used to talk about his homeland all the time. Ok Tammy...where we goin' next?

Hello Tammy
I love the quotes you have added with this post. I always like adding quotes to my posts as well and one day I would like to start a blog devoted to quotes....one day!!

I have travelled quite extensively but never been to Petra or Jordan. These photos make the place look very enticing. :D

Hope you have a lovely week.
Hugs
Peggy xxxx

What a great place to go sightseeing. It looks like you all had a great time!

I enjoyed all the pictures of your trip. Sorry you didn't get to create this weekend, but sometimes we need to do the mundane chores.
love,Gwen

Tammy.... All I can say is WOW..... I had heard of this ancient city but never really knew anything about it!! WOW.... I will be looking forward to more photos of your trip!!
Have a Great Day!
Love,
Marilyn

LOVE THE PICTURES OF YOUR ADVENTURE. LOVE TO SEE OTHER PEOPLE'S PICTURES OF THEIR ADVENTURES. THEY ALMOST MAKE YOU FEEL LIKE YOU ARE WITH THEM. AM LOOKING FORWARD TO MORE ADVENTURE PICTURES TAMMY.
LOVE KAY