From Full Moon to the Promise of Spring 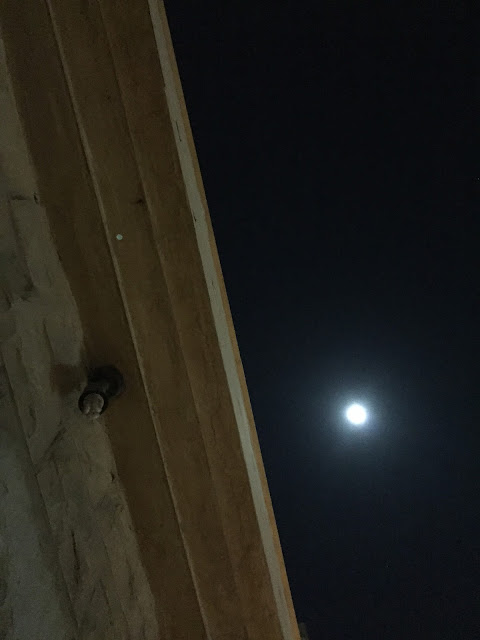 If I had left my house, I would have been able to see the lunar eclipse but that would have meant driving somewhere to get a clear view and I didn't really feel like doing that.  Instead, I patiently waited for the full moon to make its way across the sky and over the buildings in our neighborhood. 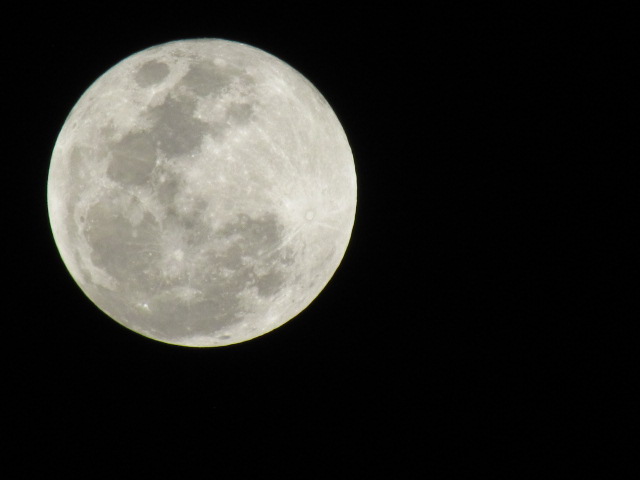 The start of February is marked in the Celtic seasonal calendar by a  celebration called Imbolc which I just learned about because of posts I was seeing on Instagram.

@dorothysparkleshoes sent me a link that provided information on the meaning behind Imbolc.  This paragraph is what spoke to me:

It is time to let go of the past and to look to the future, clearing out the old, making both outer and inner space for new beginnings.  This can be done in numerous ways, from spring cleaning your home to clearing the mind and heart to allow inspiration to enter for the new cycle.  It's a good time for wish-making or making a dedication.

It is also described as "the promise of renewal, of hidden potential, of earth awakening and life-force stirring." 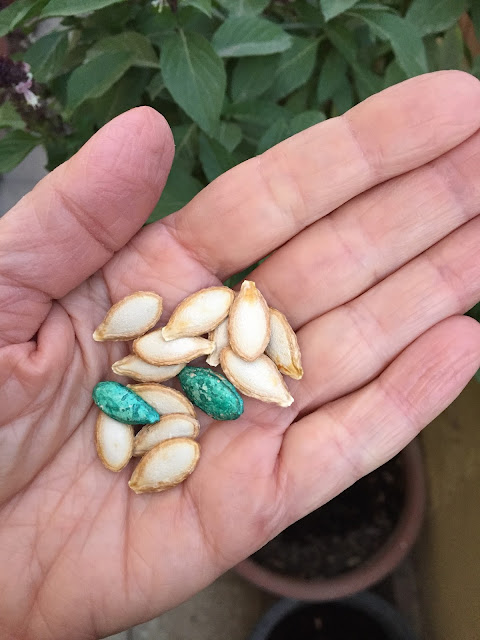 In November my husband came home with pumpkin seeds from a friend who brought them from Bangladesh. 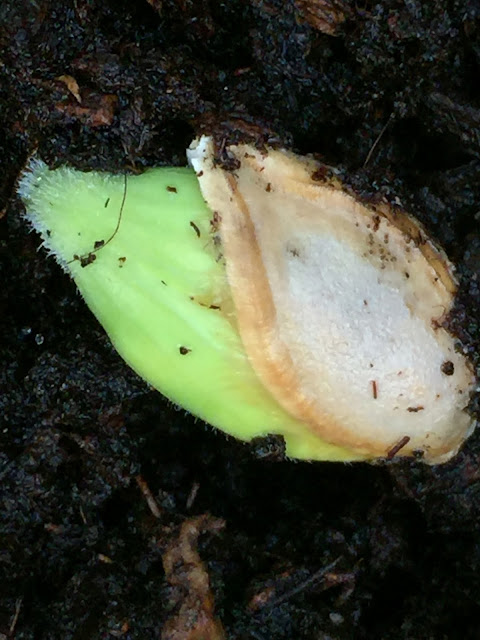 I planted them on December 3rd and by December 17th they had started to sprout. 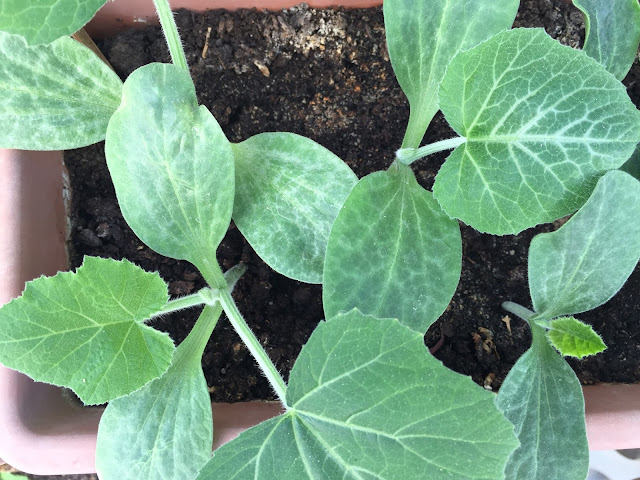 They might not have the idea conditions in small pots on my balcony, but it's been such a pleasure to watch them grow from seed. 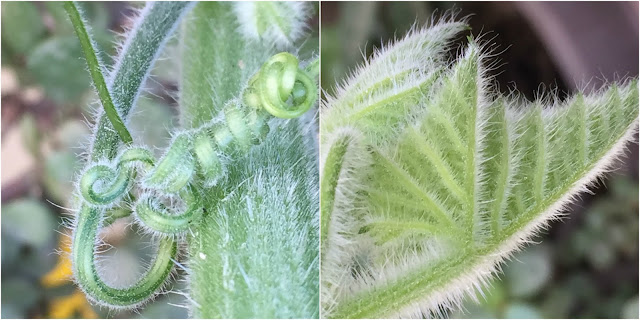 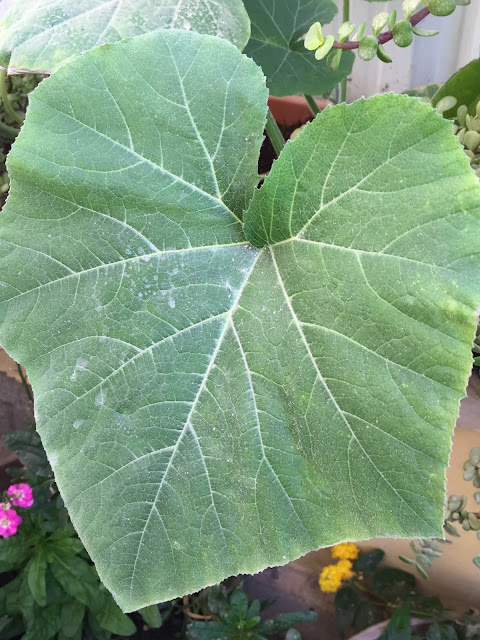 The leaves are huge now and tendrils are spreading out like crazy. 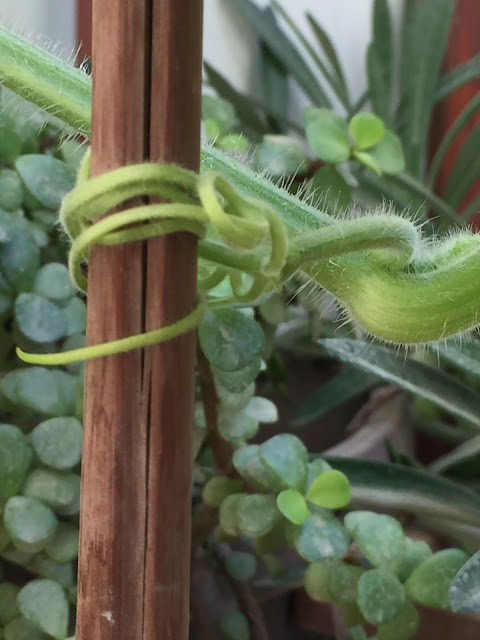 On Friday I put up a bamboo pole and the tendrils have already latched on.
Plants are amazing!  And I'm glad that I don't have to go far to witness the magic of nature up close. 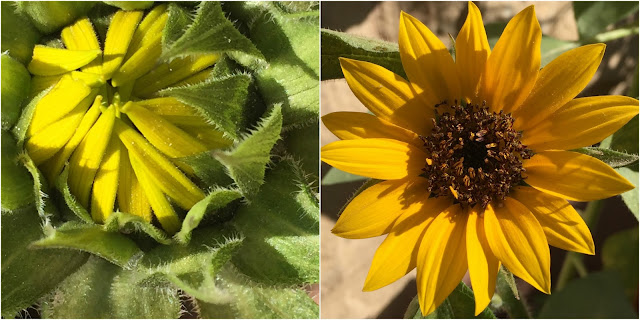 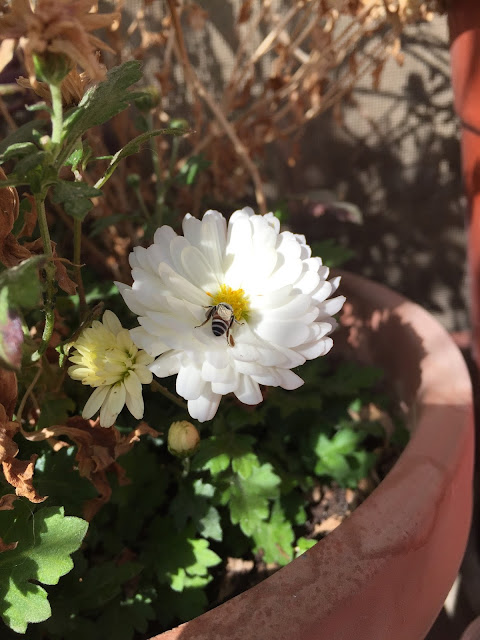 Posted by Tammy@T's Daily Treasures at 9:27 AM

Very cool plants. I love the shape.
And they seem to grow very fast!
Your photos made me feel warm inside. Reminding me of the sun. It´s cold here now!

Very interesting facts about new beginnings, the potential to heal and clean inside
and outside after this second fullmoon. There are always new opportunities
and as long as there is life there is hope.

Gave me the sign my hubby and I are doing the right thing now after our total break-down. What a process this has been!

I wish you a marvelous week!
Hugs
Sussie

You are witnessing the "life force stirring" in a beautiful way!! Yes... I have felt the promise of spring here, too. =) Beautiful photos of the moon, Tammy! Mine never turn out as well as I would hope. Ha! blessings ~ tanna

I also didn't have a nice spot to watch the moon, and couldn't possibly take good photos of it, but many others did and I enjoyed going through their photos on instagram.
Having nature at the reach of your hand is an indescribable blessing! Thank you for sharing those lovely photos with us!

Hi Tammy, How exciting going from the core to the cabbage, plant growing is very enjoyable :)

Your moon photos are great, Tammy. I'm so excited to see how your pumpkins have sprouted, that was fast and they're growing a lot. I hope you can get some pumpkins out of them. Your balcony must be lovely with all those flowering plants. I hope you're having a good week so far!

Dear Tammy,
This post makes me so happy! First, I LOVE that quote about renewal. Yes. I need that now. Winter is so very long here (cold weather for nearly 6 months of the year really) and it's difficult right about now in February when it turns out to normally be a very snowy, cold month. Second, love the pumpkin seeds and their growth. It's encouraging to be reminded that there are places in the world where plants are growing now since it's easy to forget that here.

Thanks for your encouragement on this blustery cold February morning. ♥
Kind regards,
Linda

I love to watch things grow too. The pumpkin plant looks great. Interesting to check on it every morning and see how much it has grown. You might have pumpkins soon.
xx Beca

That moon was so cool...it was shining so brightly one night, that it was beaming through the window in my front door and onto the living room floor.

Your pumpkin plants look like they're thriving well...I can't wait until warm weather here when I can start planting again. It is a whopping 6 degrees with about 8" of snow on the ground right now.

Tammy - thanks for explaining the logic behind the moon phase - I had been hearing about it but had not taken the time to really understand it! Your pumpkin plants sure look vibrant! I was drawn to the close-ups of the leaves - so furry. It is nice to know plants are growing somewhere - I am looking out the window at tons of snow - at least the sun has made an appearance today! I can't wait to see pictures of the pumpkins on the vine!

Oh how fun to see your plants going, and latching on to the poll. Nature is such a wonderful thing...seeing God creation, and how he makes things grow...I know he wants us to grow too...so latch on to God's Word. Love and Hugs.

This is a beautiful post Tammy. Your moon pictures are spectacular and I thank you for explaining it all so well to me. Science was never my "thing" and I couldn't understand the meaning of the names that went with this moon. And to top it off I never bothered to look it up! Now that you've explained it I find it really interesting. I wonder what else I'm missing out on?
Your pumpkin plants are wonderful. They are growing so quickly and I love the tendrils wrapping around the stake. Thanks for sharing them with us.
Blessings,
Betsy

Wow, you got a great shot of the moon! The image I got was so hazy with mist, it was very disappointing. How neat to see the big seed open and the green grow out, quite an amazing thing. I love how the tendrils wind and grasp for support. I hope you get some fruit from the plant! ((hugs)), Teresa :-)

These photos are beautiful and you have told the story beautifully to go along with the photos. Plants are amazing and I hadn't thought about how clever they truly are how they sense to send out parts of themselves to latch onto things. Nature is beautiful.

Happy February, I enjoyed all of the photos and thank you for sharing about the celtic traditions that is such a good mind set to approach spring.
Nature is a wonder and soothes the mind.

Oh how lovely to see your plants and flowers growing! It's such a miracle that seeds sprout and grow the way they do. Wonderful photos.
Happy February to you, Tammy! Here's to new beginnings. :)

Lovely post and yes amazing to see the different phases of the moon and I enjoyed looking out our window at the moon when the eclipse was happening.
The pumpkin plants are amazing and the tendrils twirling around remind me of the passionfruit plants we had growing when I was young

I love that paragraph Tammy, it is so true. I need to let go of more in my home and in my mind, there needs to be some space. Love the sweet vines wrapping around anything they can find. I saw the full moon in the morning early as I drove to work. It was gorgeous.

We didn't bother looking out for the super blood moon because the weather was terribly overcast with no break in sight. A bunch of people travelled to one of the highest points of our city to view it and they were rewarded by a break in the clouds just at the right moment.

Dearest Tammy,
Well, like you we must drive away to an area without trees that obstruct and otherwise we have to go to the front of our home to see at least something. Not appealing for doing so.
Love your photos, especially from the pumpkin seed germinating and developing into a healthy plant.
One never knows if a pot is the ideal environment as water is above all the key.
Sending you hugs,
Mariette

I love watching plants grow from seed. One morning you walk outside, see a tiny little sapling poking out of the soil. Your pumpkin plant is doing so well.

Dearest Tammy,
I love your plant photos! It is especially nice to watch the pumpkin grow! I hope you will get a rich harvest of it - in a big pot pumpkin plants can develop well!
Hugs from here,
Traude

Tammy dear your photos are amazing. I love the Moon especially when it is full. The Moon calls me all night and sometimes I follow it from every window I have. How very fun and awesome to plant seeds and watch them sprout and grow. <3

Your moon photos (and garden) are amazing! I sure love seeing greenery this time of year. It is a crazy state I live in. 10 inches of snow and then a week later 60 degrees!

I loved your moon photos! I was planning to see it as well but for us it was recommended to see it at sunrise. I think I did open my eyes but then I turned over and went back to sleep :-)
Amalia
xo