Food and Faces of Nepal

A salute from our doorman and Zack at our hotel in Kathmandu. 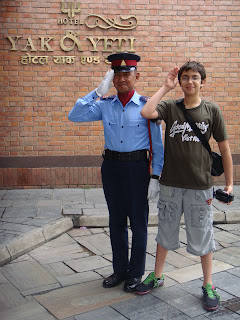 Typical Nepalese breakfast (also found in India and Sri Lanka) -- curries, chutneys and breads. (My family thinks I'm crazy but it was delicious!) 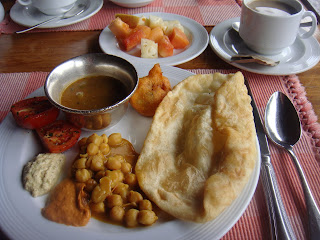 On our first day out visiting a small town and temple,this little lady wanted to sell me a flower. She is considered a beggar and there were signs discouraging tourists from giving money, but with 50% of the Nepalese people living below poverty level, how can we always say no? Plus, I did get a flower and a photo in return. 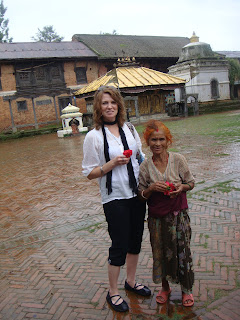 In Pokhara, these two boys had a note written in English, asking for donations so that they could buy a soccer ball for their school. Whether it was another form of begging or not, we gladly contributed and Zack wrote his name on the paper and the amount we gave. 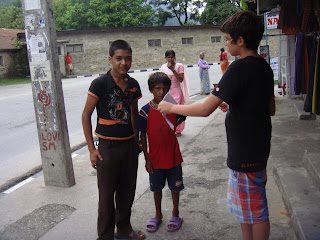 Do not stand on a high pedestal and take 5 cents in your hand and say, "here, my poor man", but be grateful that the poor man is there, so by making a gift to him you are able to help yourself. It is not the receiver that is blessed, but it is the giver. Be thankful that you are allowed to exercise your power of benevolence and mercy in the world, and thus become pure and perfect. (Swami Vivekananda)

There was much to see as we walked the old cities around Kathmandu and Pokhara ...

A woman spinning wool outside her home. 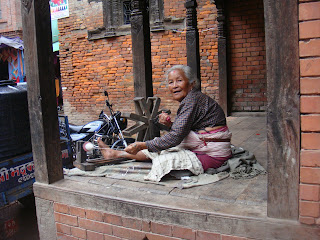 Women singing and chanting prayers at a Hindu temple. 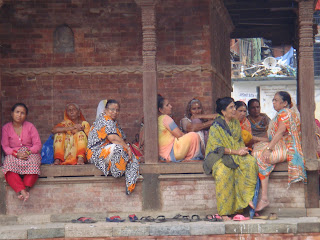 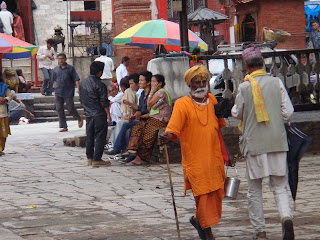 Hubby plopped himself down amongst these guys outside The Patan Museum. 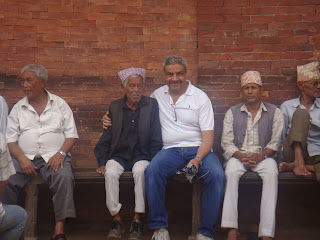 As we headed out of Durbar Square, this little guy was enjoying a snack of dried corn which is plentiful in Nepal. 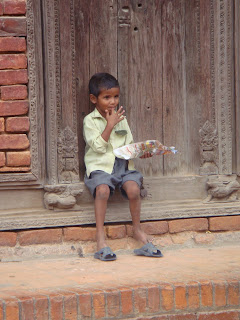 At the end of every day, I enjoyed a cold local beer. (Everest Premium Lager Beer was introduced in 2003 to commemorate the 50th Golden Jubilee celebration of the historic conquest of Mt. Everest by Sir Edmond Hillary and Tenzing Norgay Sherpa on the 29th May, 1953.) 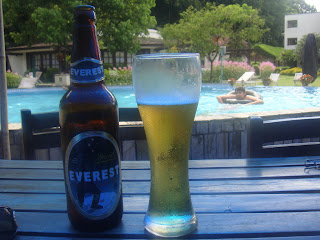 Cheers to a terrific Tuesday! Friendship blessings, Tammy
Posted by Tammy@T's Daily Treasures at 8:05 AM

Cheers to you and wishing you a great Tuesday. It was interesting to read about the beer commemerating the 50th jubilee celebration of Sir Edmond Hillary and Tenzing Norgay Sherpa.
It was great to see your photographs, thanks.

Oh this was an interesting post Tammy!
Thanks for sharing these fantastic photos with us. The food looks absolutely delicious!
Thanks for your kind comments too,
very much appreciated.
Hugs Suex

Wow..the photos are great! And..the people are so 'slight" small of stature..but the colors! what a great trip :-)

I'd gladly share that toast with you, Tammy! An ice cold beer is a fine way to celebrate the adventures of the day! Thank you for sharing them with us. blessings ~ tanna

ps I have great confidence that you could knit whatever you set your mind to do. ;)

You are seeing so many interesting things ~ and ending the day perfectly! ;)
xo Catherine

Oh this has been a real jewel of a post! I enjoyed reading it! Being an adventurer at heart (and soul) I can only imagine the beauties you get to discover! Thank you for sharing all these lovely photos.
P.S. The photo I used in my post is indeed from a postcard :) I left you a note on the related post.

I am enjoying these posts and the photos of your trip so much! I think it would be hard to see that little lady and not buy a flower from her. Thanks for sharing your vacation with us! t. xoxo

One of the things I noticed was the colorful clothing. Looks like an adventure of discovery. Have a wonderful day Tammy. :-)

Just the word Kathmandu conjures up images of old world beauty. I really enjoyed this post and enjoyed how cool it looked there, as opposed to how hot it is here. Hope your vacation is great. I could go for that breakfast, too!

Thank you Tammy for sharing your pictures i do enjoy seeing them. A very interesting post, i to would find it hard to walk past without giving or buying something. I like the picture of the lady spinning wool.
best wishes Julie.C

Amazing photos and what an amazing trip!!! I love what you have to say about giving .... That is so true :)

TAMMY, I LOVE ALL YOUR POSTS, THEY ARE INTERESTING AND YOUR PHOTO'S ARE OUTSTANDING. TODAY YOU HAD SOME WONDERFUL PICTURES, WHAT A GREAT VACATION. I KNOW IT'S NOT 2 EGGS ANY STYLE, WITH SAUSAGE AND FRIED POTATOES, BUT I WOULD LOVE TO TRY THAT BREAKFAST, IT LOOKS YUMMY.
HAVE A GREAT DAY. RIZZI

Oh my so fascinating and what an education the entire family is getting traveling!

GREAT...you got to have a nice cold beer! I'll have to show my husband the picture!

How small these people are. And how kind you two were to buy a flower and donate for a soccer ball. Such sad poverty there, but like typical Nepal people, they smile readily.

Your breakfast seemed to suit you. Is there a problem with drinking the water there, as in many countries? Fruits and veggies, too?

Colorful and amazing pictures Tammy. You're generous people, the world is so needy and hard, isn't it? Those people are so tiny, the little lady makes you look like a giant! Diane

Lovely taking the tour with you. Ever generous and kind hearted spirit you and your family are. Blessings.

What a wonderful post. It looks like you and your family had a wonderful time. That pool looks quite inviting! I love the quotes you always have for your posts....they are always appropriate.

Loved all the photos, Tammy. I KNOW seeing all the poor children and poverty stricken people would have made my heart very sad.

I have lived in two third world countries and the children always get to me.

Take care and thanks for sharing your awesome travel experiences. Susan

Tammy, that was an incredible quote by Swami ... I love it as I feel we too often think giving charity puts us in places of importance rather than serving and being blessed.

What a wonderful once-in-a-lifetime trip.....
Have a Wonderful Day ! !
Marilyn

more, more...please!!! Love seeing all the things you saw..

Your photos are wonderful, I would have given as well :) so heart-rendering!
Happy tea (or should I say beer) day to you :)

Fascinating post. I would "buy" a flower too (and wonderful quote you added). Your "breakfast" is making me hungry (almost lunch time here!)

Did my packet of cards reach you yet? Just wondering-- I mailed them at least two weeks ago, maybe 3?. They might never get to you, but then again, they just might. :)

You seriously do get to go some amazing places. Love the picture of the women singing and chanting in their colorful gowns. Stay cool.

Mariette's Back to Basics said...

Oh I envy you for the food! But I have eaten delicious Gujarati food at two evenings of pre-marriage celebrations for the son of our medical friend. We even danced with the Indians their traditional dance. It really lifts you up, such a rich culture and the food is heaven to both of us!
Thanks for sharing all this and yes, you're so right about the beggars. It is easily whisked off as a nuisance... But therewith the poverty and its sting does not vanish!

Glad to see you and the family are back safe and with great pictures and stories as always..Zack has really grown. Hugs Aunt Elaine.

ooh Tammy, I've been wanting to travel to nepal sometime... these are beautiful!!! Thanks for sharing! You're on "top of the world!!!"

Tammy, you are a treasure. It truly is in the giving. Good karma.
Brenda

You have a good heart. Not easy to say no when they have so little.
Thanks for your comment too. YOu know I went home last night and tried that beaded flower and couldn't remember what I had seen. Then in the middle of the night it came to me! Boy I'm pathetic.

Hi Just catching up with new blogger friends
Great post and a wonderful trip you all had
Swami Vivekananda..A quote to remember
Thanks for sharing
Hugs Suz x

What wonderful photos and stories to go along with them. Your family has so many wonderful travel experiences.

Cheers to you and yours!!!

This looks like a day I would have enjoyed with you. Thanks for sharing it.

A wonderful post, Tammy, and true quote. Poverty may be the norm for them but it would have made my heart sad too. I'm sure you're help was appreciated. I love the pic of the little boy enjoying his snack.

I can tell already that this is a very special place. You look so very comfortable and happy to be in this place where you are able to experience the real culture through the people that want only the simplest things from this world. I am sure it made you very happy to see how people were living, and the activities that made up their day. I would love to think that the money from the flower you bought and the money for the soccer ball were put to good use.
It made me smile to read about Sir Edmond Hillary, as I am looking for a book about the schools he built after climbing Mount Everest. I can't wait to read about the rest of your vacation!!

I've just caught up with all your holiday posts. We couldn't have been on more different holidays could we? Me in Devon and you in Nepal. Your trip sounds amazing, the sights you've seen are so different from anything I've ever seen or will ever see!

I love the quote by the Indian PM.

I liked the way your Hubby just plonked himslef down among the locals for a photograph!